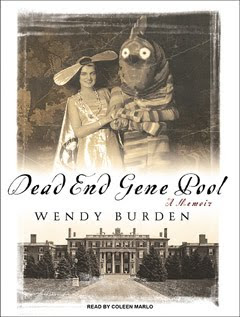 I reluctantly agreed to go swimming. I loathe swimming in the ocean. It takes the poison of a black widow spider a full hour to take effect, that of a Gila monster fifty minutes, a rattlesnake fifteen, a cobra five. But run into a stingray, a Portuguese man-o'-war, a scorpion fish, a blue-ringed octopus, or a box jellyfish (something you can't even see whooshing your way), and you start to croak immediately. And, if the flora and fauna don't kill you, the undertow will.

I always knew there was a reason I hesitated when everyone else jumped into various large bodies of water I've visited (except in Hawaii; I did actually snorkel in the Pacific -- points to me). Thanks to Wendy Burden, I now know I was justified in staying out of the ocean and I've also learned a bit more about the fascinating Vanderbilt family. Wendy Burden's great-great-great-great grandfather was Cornelius Vanderbilt and her tongue-in-cheek memoir, Dead End Gene Pool, tells about growing up in the days when sprawling mansions were slowly sold off as the family sank into alcoholic and possession-crazed dissipation.

Dead End Gene Pool begins with a little background about the Vanderbilts and the Burdens' place within the family tree then jumps into the tale of a harrowing plane ride. There's a great quote I'm not willing to copy because my husband's on an airplane to San Diego and I just don't like thinking about such things when he's in transit. The point of the story, though, is not the fact that the author could very well have gone splat in a field. Rather, the objective appears to be a glimpse of what's to come.

When the plane ride occurred, Wendy and her brother were en route to one of her grandparents' many homes. Their mother was too busy hopping the globe to mother her children, so Burden and her siblings spent a great deal of time being shuffled from one home to another. When not entertained by their alcoholic grandparents, "the help" served as their surrogate family. That is pretty much her childhood in a nutshell -- being shuffled back and forth in style, at least until their mother remarried.

You can look at Dead End Gene Pool from several different angles. The difficulty of the author's life is obvious and there's definitely an undercurrent of sadness. The author's father committed suicide when she was quite young. Her mother had little interest in her offspring and her grandparents weren't particularly cuddlesome, either. Occasionally, the male help could be known to fondle and since Wendy was female, nobody really cared. She was the invisible one; only male heirs were important.

But, in spite of the fact that Burden's memoir describes a truly deplorable set of relatives and ancestors surrounding a rather sad little girl, the author does her best to make the book humorous and there are moments that she succeeds. The book is also a fascinating set of tales that give readers a decent glimpse into the lifestyle and clearly illuminate how and why people of such fabulous wealth managed to drain the ancestral funds.

I participated in the chat with the author at Books on the Brain (the entire chat is still visible within the comments section) and enjoyed it very much. In that chat and an interview of the author (for which I didn't bother to save a link, sorry), she was cordial and positive. Although she was shuffled about, Wendy Burden is well aware that she had a privileged childhood and that her inheritance gave her a better start in the world than that of most people. The book sounds a little bitter, as if the humor is an attempt to cover pain. But, I didn't get that impression from the author at all. She seems quite happy and settled.

The one thing I really wanted to ask the author about was that cover. Who is on the cover and what was going on? Wendy's answer: "The woman is my grandmother and she is The Spirit of Aviation; the Sea Monster is my Grandfather. I actually still have the costumes…they were at a fancy dress ball. I LOVE this picture!"

Me, too. Great photo. Several people were curious about the detail in the book and the author said she came from a family of diary keepers. The detail is, in fact, so startling that it's natural for readers to wonder how on earth she could remember the meals, the china, the scenery, the names of the help, etc. Well, she didn't have to remember everything; apparently, she has plenty of records for reference and that certainly gives the book a unique depth.

3.5/5 - A witty but sad account of a privileged childhood lacking in affection, rendered with stunning detail. I enjoyed this book, but I did find that the humor felt a little forced. The author has suitably convinced me that she has ample resources from which she was able to mine the detail and the book is interesting particularly for that glimpse into the entitled and frivolous lifestyle of a prominent American family.
Posted by Bookfool at 5:48 PM