The Man Who Loved Pride & Prejudice by Abigail Reynolds 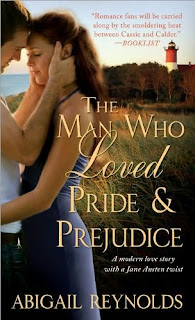 "Now, before we conclude today, I'd like to take a few minutes to review common errors in experiment design and write-ups. Not only do these occur in our lab," she clicked to display the cover of a lab notebook on the overhead screen "but also in some of our finer scientific journals." She replaced it with an image of the tabloid's front page.

The class was accustomed to her tongue-in-cheek humor, so it took a moment before any of them looked closely enough to recognize her picture. She spoke over the first gasps and whispered comments. "The scientific method requires following a particular series of steps. First, you make an observation, and then you formulate the hypothesis, a possible explanation for your observation."

She clicked to show the headline of the article, "Calder Westing in Love Nest with Sexy Scientist." "Your observation must be a neutral one that avoids bias. A good scientist will, of course, define any terms that might cause confusion." She used her laser pointer to circle the words "love nest" and "sexy". "And, then there is the most fundamental error, which is to mistake the hypothesis for an explanation of a phenomenon, without performing experimental tests."

She had to raise her voice to be heard over the laughter. She flashed up the first paragraph of the story. "It simply will not do to formulate your hypothesis without a thorough review of the literature. In this case, the researcher states that the two subjects under observation have just met, whereas a quick check of a book written by Calder Westing makes mention of their acquaintance well before this date." The acknowledgments page from Pride & Presumption appeared on the screen.

--excerpt from Advanced Reader Copy of The Man Who Loved Pride & Prejudice (changes may have been made to the final edition).

My brother-in-law has asked me why I torment myself by reading offshoots, spin-offs, and adaptations of Pride & Prejudice and I think I can answer him, now. Because you never know when some fabulous writer like Abigail Reynolds is going to come along and turn the story on its head, alter it enough to make it her own original and you'll end up closing a book thinking, "Wow. That was really satisfying."

The Man Who Loved Pride & Prejudice is that kind of book. Cassie Boulton is the modern version of Elizabeth Bennet and Calder Westing III is her Mr. Darcy. But, apart from his reticence and her brisk offense at his perceived arrogance, plus the eventual happily-ever-after, the two stories are really quite different. Cassie is a marine biologist with a particular affection for salt marshes. She's intelligent, driven and not overly interested in bothering with relationships. Her past was rough and must remain hidden. The most important thing in her life is tenure at the university where she teaches, but her biggest love is her summer job researching life in the salt marshes of Woods Hole, Massachusetts.

Calder Westing III is quiet and aloof. He doesn't seem to have much personality at all and, even worse, he comes from a famous political family. If there's one thing Cassie doesn't need it's a famous Republican family breathing down her liberal neck.

But, as Cassie gets to know Calder, she finds that she's strongly, almost unbearably attracted to him. "Pheremones", she tells herself. It's just an animal attraction and she, as a scientist, certainly knows better than to let hormones get the best of her. But, then they spend a passionate evening by the sea. Actually in the sea, but that's neither here nor there. After Cassie brushes Calder off, he writes a story about their short time together and eventually she realizes there's more to Calder than meets the eye.

What I loved about this book is that the author did not bind herself to the Jane Austen story. She used pieces of plot and characteristics, but in Cassie and Calder she created two distinctive characters. It's not simply an updated P & P. The characters are smart and interesting and the storyline is unique enough to not reek of "knock-off". It's a tremendously satisfying book. The only thing I might complain about is the length, but let's face it . . . I'm not a chunkster-loving type of gal. I'd chop at least 50 pages out of anything that reaches 400+. When I closed the book, I recall thinking that there really wasn't much tightening that could have been done.

Since the book is classified as romance there are some graphic sex scenes. Otherwise . . . no complaints. I loved this book and will look for more by the author. I'm not the typical romance fan, but I like the occasional reliable happily-ever-after.

4.5/5 - Only the barest skeleton of Pride & Prejudice is used as the basis of this remarkably original modern romance. Smart characters, lovely setting, excellent dialogue and rocking fine writing make this juicy romance a winner.