The Brothers of Gwynedd by Edith Pargeter - Book 1: Sunrise in the West 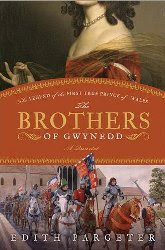 I requested The Brothers of Gwynedd from Sourcebooks because I've read very little about Welsh history and felt I needed to amend that, in part because I've been to Wales briefly and have always wanted to return. The book contains a quartet of stories about the descendents of Llewelyn the Great, beginning in the 13th century and progressing forward.

The first book is entitled Sunrise in the West and takes up only 185 of the 760-page volume of all 4 books, but those are some whopping dense pages. When I first opened the book, I had a migraine and couldn't make heads or tails of the writing. It took something on the order of 5 attempts on different days to get through the first paragraph -- a lengthy paragraph which only tells who is narrating the story and his relationship to the characters.

After I managed to slog through the first page, though, things improved dramatically. The Brothers of Gynedd may be a rough read, but it's worth the effort. Samson is the narrator of the story and he is the son of a waiting-maid for the Lady Senena. Senena's husband, the Lord Griffith, is the eldest of Llewelyn the Great's sons and the rightful heir but in the 13th century, England and Wales are tentatively allied. If you know anything at all about Medieval England, you know that alliances were tricky. One never could tell whether a brother or some other ally was going to turn coat and have you slaughtered or tossed in a dungeon; but, at any rate, the Lord Griffith was illegitimate and while the Welsh considered all sons legit, the English didn't recognize "bastards" and that meant the Lord Griffith was basically shafted.

After learning the background and first twelve years of Samson's life and how it blended with that of the royals, the reader is returned to the heart of the story to find that Llewelyn has done plenty of damage, snatching up land from everyone of any consequence. When Llewelyn becomes ill and then dies, the Lord Griffith and his eldest son are considered threats to the legitimate heir and they are both imprisoned because it's the easiest way to keep them from causing trouble (not the first imprisonment for Griffith).

I've been reading historical fiction since I discovered my mother's copy of Desiree by Anne-Marie Selinko in my early teens, but only recently have begun to dip my toes into the waters of Medieval history. It is absolutely fascinating. From what little I've read, it appears that the men spent so much time either in battle or in dungeons (or, even more inconveniently, dying) that the ladies were forced to use their wits, prepare and protect their sons, make political gestures for the sake of the men and forge alliances through marriage, etc. The Lady Senena is, in this case, the mother and wife who must work to protect her family's interests at the beginning of the first tale.

I won't go any further to avoid spoilers, but what I think is important to mention is that the book becomes less difficult as one adjusts to the author's style. I'm a part of the tour and reading group that is reading the four stories together and I can hardly wait for the first discussion (hosted by Amy at Passages to the Past on Monday, May 24) to hear other impressions. The writing is deliberately "of the time" -- that's a part of what makes it difficult to read, much like Georgette Heyer's "Regency-speak" -- but it's also, at times, lyrical and breathtaking.

All the grass was thick and creaking with rime, the bushes that stood silent and motionless in the stillness rang like bells when I brushed too close, and shed great fronds of feathery ice on my hose and shoes. I drew closer, circling the rim of the ditch and avoiding the main face where the great doorway was, and the ditch was spanned. There was such a silence and stillness that I should have heard if another foot had stirred in the crisp snow, but there was nothing to hear. I was the only creature abroad.

Isn't that lovely? Sunrise in the West is dense but definitely worth the time spent reading and highly recommended. I'll continue to read this book throughout the coming months, as each of the 4 books in The Brothers of Gwynedd is read, reviewed and discussed. I'm sure anyone is welcome to the discussion, so mark your calendars and grab a copy if you'd like to join in.

A few other reviews:

Passages to the Past
Stiletto Storytime (a full list of all reviewers can be found, here, complete with links)
The Adventures of an Intrepid Reader (also contains a complete list of reviewers, with links)

Fiona Friday will be late, today, but believe me -- she will not let me forget. Nor is she going to allow me to conveniently forget the fact that we've just run out of canned cat food. I had to share my scrambled eggs with Fiona, this morning. If I hadn't, I would have left the kitchen with a kitty awkwardly attached to my pajamas (Her way of saying, "Hey! Don't forget the cat!" is to launch herself at a leg and wrap all four legs around it . . . with claws). Happy Friday!
Posted by Bookfool at 7:47 AM