A Hundred Feet Over Hell by Jim Hooper 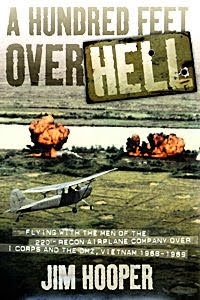 A Hundred Feet Over Hell: Flying With the Men of the 220th Recon Airplane Company Over I Corps and the DMZ, Vietnam 1968-1969
Copyright 2009
Zenith Press - Nonfiction/Vietnam/History
258 pages, incl. appendix, glossary and index

That night I was at Marble Mountain having a cold beer with pilots of the Black Cats helicopter company, listening to some loud rock and roll, when someone stuck his head in the club and yelled, "INCOMING!" The place suddenly emptied around me. I'd never heard of "incoming" before, so I walked outside and saw them diving into a bunker. I looked around at all the excitement and thought, "Wow, this is just like being on a movie set." About then--kaBAM!--a 122mm rocket hit, and I could not get into that bunker fast enough.

A Hundred Feet Over Hell is about a group of men who flew Bird Dogs (a type of Cessna plane that flew no faster than 130 mph -- low and slow) in and near the Demilitarized Zone, or DMZ, between North and South Vietnam from 1968-69. I got my copy specifically to read for the Vietnam War Reading Challenge, and it is my favorite Vietnam read, so far. Seriously, I'm ranking it above The Things They Carried. Can you believe that? I can't even believe that.

A Hundred Feet Over Hell is nonfiction and I'm sure that will keep a few people from reading it, but if you're one of those . . . reconsider, please. It's amazing. The author's brother was one of the pilots who flew a Bird Dog and he survived a serious injury, so he is among those who tell their stories within the pages of the book. The way it's written, there is some description by the author but the vast majority of the book is written in first-person accounts of the pilots' experiences. Sometimes they overlap, so that you get to hear the same story from more than one viewpoint. In one case, one of the soldiers on the ground told his viewpoint along with at least one of the pilots who helped save him from certain death when he and his brothers in arms were surrounded.

The Catkillers were constantly under fire because of the way they flew and their low speed. Their job was to pinpoint targets, call in planes with specific artillery, mark targets with white phosphorous rockets and then report on the success of hits, often repeatedly, until the target was hit. Sometimes a pilot on his own or (more typically) a pilot and an "observer" flew over or near the DMZ on a general reconnaissance mission, in order to search for signs of the enemy to determine targets to hit for preventive measures. But, a good portion of the time they flew missions to cover soldiers on the ground or to help locate the enemy so that helicopters could extract the injured and any remaining uninjured soldiers could escape dangerous situations. They went into some very scary, very tense situations under heavy fire. These guys were courageous.

And, the real kicker is that they didn't carry weapons. Apart from a hand-held automatic weapon which they occasionally fired out of a window (and those were carried by choice, not by design), there was no weaponry on board the planes. None.

Besides being action-packed, I found that the book was very readable, although there is plenty of terminology that the novice will have to learn by flipping to the glossary and not absolutely every strange word or weapon designation is defined. Because the book is focused on a single year, you get a pretty well-rounded view of what it was like for a pilot to live through a tour of duty, including the crazy things they did to unwind. There are a few really sad moments when pilots were killed, wounded or went missing. Because of the way the book is told, the reader gets to know the individual personalities quite well and in combination with a photograph section, it's really gut-wrenching when someone you've become acquainted with is killed or injured.

5++++++++/5 - Wow. I just can't say enough good things about this book. Well-written text combined with personal accounts so emotional, tense, frightening, moving, funny, sad and shocking that I went from holding my breath to sighing in relief to laughing to wiping away tears. This is absolutely one of the best books I've read all year.

A Hundred Feet Over Hell is not necessarily an easy read because of the technical aspect and I found that I enjoyed it most when I finally decided I was going to sit down and read the entire book through, but it can be read in little bits. Reading the majority in a single sitting meant details (terminology, characters, etc.) stayed fresh and made for a read with more impact.