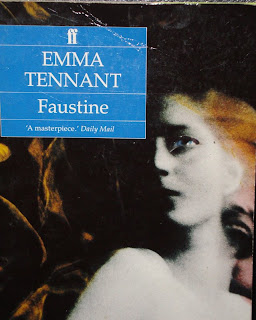 The night I arrived in England - the night of 20 June - was as unexpected in its outcome as the afternoon had been, my early half-acknowledged memories of the place becoming quickly overlaid by the contrived memories of a woman who was a monster, whether she was alive or dead. And so this tentative sense of déjà vu was cancelled, making a mockery of my journey, reminding me yet again, if I needed reminding, that my childhood was well and truly buried and that wherever I might choose to look for myself, I would find only evidence of another life.

That's a partial photo of my battered copy of Faustine, at right. I bought my copy at a salvage store and, in case you're interested, the book stock that arrived at the salvage store, that year in the 1990's, was chiefly responsible for the beginnings of my sizable personal library. When the healthiest books salvaged from a fire in a bookstore arrived, they were marked 60% off the retail price. They then went to 70%, 80%, 90%, 95% and finally . . . 10 cents per book or $1.00 per bag. I probably ended up buying 4-500 books. Many of them have been sitting unread for years. Plenty of others have introduced me to some very fine writers, including Roddy Doyle and Paul Auster.

A discussion with Mark on Twitter (<----That's a link to his blog) about Robert Nye's version of Faust and various other topics, including sheep, scenery, and the dangers of used-book warehouses led me to pull Faustine off my shelf.

I haven't read Faust in any other form, but after finishing the book I did dash over to Wikipedia to compare notes and Faustine is similar to the German legend but instead involves a female who sold her soul to the devil. There is no character named "Faustine". Instead, the book begins with Ella, who is living in Melbourne, Australia, with her aunt and uncle. Ella's lived in Melbourne for many years. Her mother has ceased to visit her and her grandmother has stopped sending gifts. Ella has flashbacks from her childhood in England and seeks to know what happened. Why did her mother, Anna, leave her? Who was the man she recalls pushing her pram? What happened to her grandmother, Muriel?

After Aunt Maureen lets it slip where her grandmother might be living, Ella packs up and travels to England to search for answers. She ends up at an estate that is as much a shrine to the legendary Lisa Crane (entrepreneur and beauty who used to hang out with such famous people as Andy Warhol) and a lady by the name of Jasmine -- formerly Grandmother Muriel's best friend.

I don't want to give anything away, so I'll just stop right there and not reveal anything more about who sold her soul and why. At only 140 pages, Faustine is a quick but very involving read. The author skilfully revealed the story of Ella's mother and grandmother and their encounter with the devil (whose name I won't reveal), little by little. Had it been much longer, I think Faustine would have been the kind of book that makes you pull your hair and scream, "Just tell us what happened!" but it's not. Faustine is really pretty amazing in its pacing -- just enough is revealed that you don't want to slug the author. I closed the book feeling satisfied.

- A beautifully-written retelling of the German legend with generally yucky characters. It's hard to like anyone at all in the book, but I thought the writing was so engrossing and the craftsmanship so awesome that it would be wrong to take more than a point off for a bunch of icky characters. It's a very sad story about someone selling her soul to the devil, after all, so I suppose you have to expect a good bit of negativity.

Still more to come. I'll keep attempting to crank out reviews until I lose my steam.