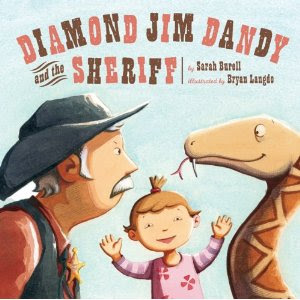 Nothing exciting ever happened in Dustpan, Texas.
The Menfolk snoozed at Earl's Feed Store.
The ladies dozed at their sewing circle.
The kids drifted off in school and drooled all over their books.
The town sheriff took up babysitting just to pass the time.

So begins Diamond Jim Dandy and the Sheriff. With adorable, expressive illustrations, the town's bored inhabitants are shown snoozing. The sheriff is rocking little Idie Mae Tumbleweed when, "Holey Buckets!", along comes a rattlesnake. The sheriff tells the snake he looks friendly enough but he's not welcome in Dustpan and points the way out of town.

But, the snake is determined to stay. In the feed store, he ties himself into knots to entertain customers. The sheriff tells Idie Mae to stay put while he goes after the snake. But, the snake has moved on to the Town Meeting Hall where the ladies of the sewing circle are admiring the diamond pattern on his back and Odette Hicks has sewn a diamond onto her bloomers. The sheriff is reminded that he needs to change Idie Mae's diaper.

After the snake is found playing with children at the schoolhouse, the sheriff holds a town meeting and discovers that everyone finds the rattler entertaining. But, he still must go. Then, suddenly, someone realizes that Idie Mae has disappeared. Everyone searches for her and Mrs. Tumbleweed faints when one of them suggests that she may have crawled over to Deadman's Gulch. The entire town rushes to the gulch, where they hear rattling. Idie Mae is sitting on a ledge. Then, she begins to fall, grabs the snake's tail, and he starts to plummet with her.

The quick-thinking snake digs his fangs into a crevice in the rocks and swings Idie Mae out of the gulch and into her mother's arms. Awww. So sweet. Of course, the rattlesnake is now a hero, so the citizens name him Diamond Jim Dandy and the sheriff makes him a deputy. He's especially loved by the children.

5/5 - Adorable story, wonderful illustrations and a nice ending make this story a winner. Both my husband and I thought it was strange that the authors chose a rattlesnake to use as a hero because children need to be taught to stay away from rattlers, not cozy up to them. But, it's simple enough to repeat that lesson, each time one reads to a child and I like the book too much to take off even a tiny chunk of a point.

This is Book 3 for Children's Day. I have at least one more book to review and one that I just want to mention, for now, because it may be a few weeks before I get around to reading the book.
Posted by Bookfool at 3:25 PM