The Lunatic Express by Carl Hoffman 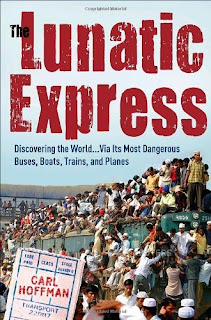 I got my copy of The Lunatic Express from Goodreads! First time that's ever happened. I chose to attempt to win a copy because I love travel memoirs and the crazier, the better. I love reading about people who are daring enough to go places I would never go, myself.

The Lunatic Express is about one man's decision to travel the world using the worst possible travel modes available -- not to risk his life, but to see how the rest of the world travels.

It was primarily a mid-life crisis that led Hoffman to the idea of traveling on buses that drive too fast around dangerous cliffs with bald tires and routinely plummet over the edges, boats known to sink and planes and trains that are rusty and so poorly scheduled that one might have to wait three days for them to even show up. Hoffman is a travel writer and he needed to work something out of his system. It seems like a strange way to work through a mid-life crisis but he likes being amongst the natives, so to speak, learning about other cultures and meeting people.

What I think you really get out of this book is an understanding of why people use such dangerous transportation in other countries and just how horrendous it is. You learn about the aching poverty, the customs and kindness of strangers and how people interact when they're forced into extremely tight proximity. You also learn about our world's dwindling resources from those who've watched rainforest disappear and why people are willing to do harm to their own little piece of the world.

All this, when I was little, was still primary forest cut with little trails where native people came to fish. There's no mahogany left. When I was little my father and I would walk through the forest looking for Brazil nuts, but now you've got to go seven hours by outboard upriver to find primary forest.
--from p. 47 of uncorrected proof

The Lunatic Express is not a funny book. The author was searching and you can feel his pain, at times. You also can't help but ache for the impoverished people he meets, although many of them seem happier living in poverty and tight quarters than most Americans in their sprawling homes, separated from other people. Hoffman gives his readers a fascinating glimpse into parts of the world many of us don't really know much about; it's a learning experience. That was what I loved about the book -- the peek into other lifestyles. You will leave it with a new appreciation for modern, clean transportation and a longing for the old sense of community.

The only thing I really disliked about the book was that it was set entirely in past tense. So, if the author spoke about the current state of the rainforest at the time of his visit, he put it in past tense. Usually, writers shift to present when describing such things as conditions at the time of writing or statistics and it's understood that those particular descriptions are from a moment in time. I thought the lack of tense shift was awkward, but since I had trouble putting the book down and enjoyed it immensely, otherwise, I only took off a single point.

One warning: It's a dirty world. If you don't like to read about having to wait to relieve oneself by the side of the road (and other bodily functions), nasty insects and filth, there will be times this book will make you cringe. Hoffman didn't pretty up the truth. There are some gross-out moments.

4/5 - A rare glimpse into parts of the world we barely read about in tiny little news blurbs, well-written and engrossing. Not a happy book. If you're looking for a lighter tone, seek out No Touch Monkey by Ayun Halliday or First Comes Love, Then Comes Malaria by Eve Brown-Waite.

There's not much other news, actually. I've recently received a single book in the mail:

It was a drawing win from Luanne of A Bookworm's World - thanks, Luanne! I've got Borchard's other book, Beyond Blue, and will dive into one or both, soon.

We're still having serious electrical issues and that doofy electrician never did call back with an estimate to replace our breaker box, so I'm just going to get online in the morning. Update: Doofus called huzzybuns and will be here, tomorrow. Please pray (or cross your fingers) that he doesn't do anything that will cause the house to burn down. One good thing about our power problem: Since the netbook is a pain and I'm not blog-hopping at all, I'm doing a lot more reading. Since Saturday, I've finished:

A Mango-Shaped Space by Wendy Mass
The Secret Lives of People in Love (HarperPerennial issue) by Simon Van Booy
Shakespeare Wrote for Money by Nick Hornby
Non Campus Mentis, compiled by Anders Hendriksson and
Life in Spite of Me by Kristen Jane Anderson

And, I'm nearly finished with The Prophecy by Dawn Mills -- a book that has gotten terrible reviews at Amazon, but which I'm actually enjoying. I guess that just goes to show that we're all individuals and you never know when you might end up liking or even loving a book everyone else would happily use to line a bird cage. The Prophecy is a FirstWild tour book, so I'll be posting a sneak peek and review, tomorrow, followed by a Fiona Friday pic in the evening.

I'm going to start punching out mini-reviews as fast as I can, this afternoon, while lifeguard son is working (preparing the pool for summer). I've decided I can't stand the axe of unwritten reviews hanging over my head, anymore. So, please forgive the coming onslaught.
Posted by Bookfool at 8:04 PM