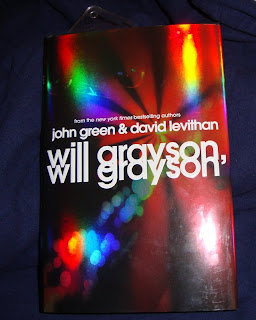 Oh, boy! I got to do a buddy read with Kelly (aka "Kailana" of The Written World)!! I've been reading her buddy reviews with other people and enjoying them, and we were both excited about John Green's latest release. It's been loads of fun bouncing emails back and forth.

Will Grayson, Will Grayson is the story of two teenagers with the same name who meet each other and then find their lives intersecting in various ways. The chapters alternate from one Will's viewpoint to the other. I've made a comment on the device used to distinguish the chapters, below.

The first Will Grayson's best friend is a boy named Tiny Cooper. Tiny is huge, expressive and very gay. Will isn't even sure he likes being friends with Tiny, but they've had an off-and-on friendship for years and his other friends drifted away when he wrote a letter defending Tiny's right to be on the football team, regardless of his sexual orientation. The other Will (#2) is gay and depressed. In general, everyone just wants to be loved and accepted and when the two Wills cross paths, they end up helping each other in unexpected ways.

Kelly and I each came up with three questions and answered both sets. You can read Kelly's answers at The Written World.

My answers to Kelly's questions:

1. How did you feel when you finished the book? Has your initial reaction stayed the same, or do you feel differently about the book?

I had mixed feelings when I closed the book. In some ways I liked it better than Paper Towns (my least favorite book by John Green) because everything seemed to be wrapped up a little better; I didn't feel like there were any loose ends or that the whole point of the book sort of went splat. But, I can't say it was a great book and now I think . . . actually, on reflection I like Paper Towns better. I just thought the storyline was really overwhelming. I liked the writing and I also thought the theme of acceptance of yourself and others was very clear. The overall reading experience was a little disappointing, though. I don't think I'd ever reread the book.

2. Which character in the book was your favourite? Least favourite?

I liked Jane, the straight Will Grayson's "love interest", if you can call her that. And, I liked Gideon, the gay Will Grayson's gay friend -- both of whom were secondary characters. I think it was at least in part because those two characters weren't obsessed with sex and seemed to have their acts together; and, maybe because they were just the kind of people who were there when they needed to be to support their friends. But, I also think the two Will Graysons were pretty odd and rather bland. One was gay, fatherless and depressed and the other so vague and colorless that I kept forgetting the circumstances of his home life. Tiny was just exhausting, although I did like his enthusiasm and I thought there was a deeper meaning to his energy level and good cheer, which was nicely described via dialogue with Will #1, toward the end of the book.

3. What did you think about the ending? (Without giving too much away.)

The ending was so bizarre. I don't think it's telling too much to say the ending involves a play written by Tiny Cooper. I thought the play itself was kind of creative, if weird. The entire book led up to that ending but I don't know exactly what I expected -- probably a little less of the play and more of the action around it. For some reason, the fact that it was going to end up being central totally escaped me. What happened in the audience and the ending comments about the two Will Graysons were, I thought, awfully far-fetched. I left the book with a bit of an "I don't buy that" sensation.

My answers to My own questions:

4. What other books have you read by John Green and/or David Levithan and how do you think Will Grayson compares?

I've read An Abundance of Katherines, Paper Towns and Looking for Alaska. What I really loved about all three books is that they were immensely creative and the characters were, for the most part, extremely intelligent and very well-rounded. I didn't feel like I ever got to know the two Will Graysons as well as the protagonists in the other John Green books and I thought Will Grayson #1 was a little on the flat and lifeless side. He improved throughout the book, but he just wasn't as interesting as the typical John Green protagonist. I've never read anything by David Levithan, but it seems like he has a very similar voice to that of John Green and since I like John Green I'll likely read more by him.

I found the lack of capitalization and lousy punctuation in Will Grayson #2's chapters extremely annoying. Here's an example:

i have no idea why anyone would want to become a teacher. i mean, you have to spend the day with a group of kids who either hate your guts or are kissing up to you to get a good grade. that has to get to you after a while, being surrounded by people who will never like you for any real reason. i'd feel bad for them if they weren't such sadists and losers.

Eventually, I did get used to it, but that doesn't mean it was comfortable to read. Assuming the point was to distinguish the two characters' chapters, I think italics would have done the trick a bit better. I also got really sick of Tiny waxing on about the loves of his life, primarily because of the sheer quantity -- if I remember right, he'd had 33 crushes and/or boyfriends by the end of his senior year in high school. That seemed kind of insane.

Kelly mentioned a scene in which Tiny got very drunk. It was pretty disgusting and I still don't think it did anything to forward the plot. It wasn't something that stuck with me, in the end, but I agree with her that it was a nasty scene and I personally think it could have been left out.

6. What did you consider the main theme of the book? Do you think the sheer quantity of gay characters diluted the theme or made it more powerful?

I thought the theme was that regardless of our preferences (for the opposite sex or music or whatever) we should be accepting of other people, that acceptance and presence -- being there for each other because friends care about each other, not only just to have a good time together but when needed to help our friends through a rough time -- is the basis of lasting friendship.

I thought Will Grayson #1 did a rather nice job of expressing the theme via his discovery that Tiny Cooper was and always had been his best friend, even though at times his best friend made him cringe. But, I did think the quantity of gay characters lessened the impact. I felt so completely overwhelmed that the book was hard to believe. There was never an absence of disbelief. I always felt like I was outside of this story, looking in. It was too unrealistic to believe in the characters and feel involved with them.

Kelly mentioned that the acceptance theme extends to accepting yourself as you are and I totally agree with that. After mulling the book for several days, I'd completely forgotten about the importance of friendship in the book and it was the idea of accepting each other and one's self that stuck with me. As you near the end of the book, most of the characters seem to have had some sort of epiphany that has made them become more comfortable with who they are.

I love that cover. It's so pretty. I see it as an abstract representation of the color and excitement of the ending scenes (Tiny's play). Also, I loved the name of the band the characters are obsessed with: Neutral Milk Hotel. It's just odd enough to work.

There is some really nasty language in this book and I think it's deserving of a family warning. This is the second YA book I've read that has a certain word I consider X-rated and I would not hand the book to my son (meaning "recommend it to him"). He wouldn't read it, anyway. Kiddo prefers plot and Will Grayson is really more about relationships, acceptance, finding love and finding oneself. But, if my son liked this kind of book and desired to read it, I would tell him what I thought of the language before he walked off with it. My 18-year-old and I discuss books and if there's something I dislike or disagree with and I've already read a book, I'll tell him in advance. But, I don't censor his reading.

Thanks, Kelly! We need to do this again, sometime. :)