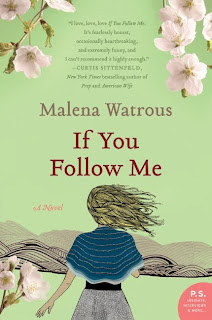 From the beginning, loyalties have been clear. We both love Amana but she belongs to Carolyn, who knows just how to pet her, how to play with her, when to pick her up, and when to leave her alone. She honors her feline whims and is rewarded with canine loyalty. [. . . ]

"The gomi froze," Carolyn says, as she sets the cat down and peers into the garbage can in front of our house. Sure enough, water has dripped from the roof and filled the can, melted and frozen solid, forming a giant cube of ice sealing in the garbage. She pushes the can onto its side and the cube slides heavily to the pavement. The setting sun, faint as a headlight pushing through fog, illuminates the cylinder of yellow-veined ice. Like scraps of insects trapped in amber, I see a wine bottle, a milk carton, kibble, and cigarette butts.

"An unsorted trashsicle," she says, looking at me from beneath one arched brow.

If You Follow Me is the story of a 22-year-old named Marina. After her father's suicide, Marina found comfort from a college friend named Carolyn and ended up falling for her (Oh, yeah - WARNING: Lesbian characters). Both are seeking escape in some form and Carolyn comes up with the solution. She applies to teach English in Japan for a year. Marina decides to do the same and they end up in Shika, a very small town on the Noto Peninsula. They move into a traditional Japanese home and immediately begin having difficulties -- with trash, also known as "gomi", which must be sorted to very specific rules and deposited at the correct place on the right day or the neighbors become very irritable, and with their relationship.

While Carolyn and their relationship is important to the story, If You Follow Me is really Marina's story. It's about the pain that she still hasn't figured out how to face and her frustrated attempts to forge an identity.

I read just one review (and the comments that followed) when I was seeking out an image and I found that a lot of people found the book negative because of suicide, the not-so-harmonious lesbian relationship, the heavy emphasis on trash and frustrating characters.

Fortunately, while I think all of those are valid concerns, none of that bothered me. What really bothered me was the attitude toward the relationship; Carolyn wanted to keep it open and had no interest in settling down permanently with one life partner. That's something I simply can't understand or relate to, a very negative way to go into a relationship of any kind. It's like saying, "We're doomed," from the outset.

The trash was, as I saw it, an illustration of conformity. Marina is a person who fights rules so she has to fight her own yearning to break the rules, to just toss out her trash as she pleases in the same way she fights conforming to certain societal standards -- and, then, has to fight to fit in when she needs to. Internally, there's a big wrestling match going on. Marina has absolutely no idea how to handle her father's death and running far away is at least partially symbolic of her fear to face his death and just walk through the grief.

What I liked about the book was that there was a hint of heterosexual romance with both women. I guess they weren't really homo- so much as bi-sexual. Seriously, much as I try to be accepting, I just don't like to read about gay romance; and, I don't like graphic sex, period. I do not believe sex scenes forward a plot. But, I kept reading at least in part because I was hoping Marina would end up with Miyoshi-sensei, her male supervisor and by far my favorite character. I found that I was very fond of several of the secondary characters.

I loved the setting. I like learning from a book and I thought I learned a little bit about the Japanese way of life. The fact that Marina's father committed suicide didn't bother me, but I can see why people who've experienced the suicide of someone close might want to avoid the book and the replaying of emotions. I have the same problem when cancer heavily figures into a book's plot. I don't want to read about it, period. I've been through it too much, already. It's not entertaining.

What I disliked was the fact that Marina and Carolyn were pretty negative people and they have a problem with a really nasty young neighbor. I would have liked some funny, upbeat scenes that didn't involve trash -- although, admittedly, I got a little bit of a kick out of the picky trash-sorting rules and I absolutely loved the letters Miyoshi wrote to Marina whenever she did something wrong.

3/5 - I liked this book, but I didn't love it. The ending is upbeat and pleasant, but you have to wade through a lot of pain, difficulty with students (including some way-too-graphic instruction about sex education) and a very uncomfortable relationship. There is also one terribly gross roach-invasion scene that I think could have been left out entirely. The author's writing --purely looking at it from a standpoint of skill-- is excellent, but I'd like to see a cleaner, more positive book from her. If you can't bear reading about suicide and the emotional fallout, you might want to avoid this book.

More reviews are coming . . . wish I could think faster. I spend an awful lot of time crafting reviews. "Hammering them out" is a bit of a misnomer.
Posted by Bookfool at 10:00 AM