The Prophecy by Dawn Miller (review) 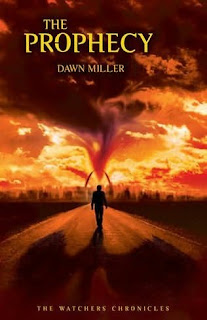 Quick note: The cover at left is not the current release cover, which you can see in the sneak peek post, below. I couldn't find an image of the black cover with wings that was large enough for my taste (and, quite honestly, I like this cover better --The Prophecy takes place in St. Louis and I love the image with the arch).

The Prophecy is a classic tale of good versus evil, which begins with the stories of 5 childhood friends. Each is having nightmares; each writes in a journal and can't remember certain portions of his life. Their memories are slowly returning and they are seeing things . . . dark creatures, people with shadows over their faces, and powerful men with amber eyes and giant swords.

Jonah, Sam, Carly, Jenna and J are all known as "Watchers". They're able to see both angels and fallen angels; and, their job is to save the world by battling evil. The Watchers are in danger because they can see things the evil side doesn't want them to be able to see and, when together, they're too strong for the fallen. After one of the Watchers is killed, they realize that Jenna's son, Mikey, is also a Watcher. But, Mikey is very young and vulnerable. If the bad guys can get him away from his mother and the other Watchers, their power will be weakened.

The Prophecy is creepy and hallucinogenic. I can understand why it's gotten bad reviews, simply because there is a little too much hidden from the reader. The characters don't necessarily think in complete thoughts -- enough information is left out of their conversations and inner dialogue to give the book the feel of a jigsaw puzzle that you have to piece together without a whole lot of help from the author, but eventually it begins to pull into a semi-coherent form. The Watchers are, unfortunately, a bit stupid and bumbling. I kept thinking, "Just gather together. Come on, just gather together." It's pretty obvious the Force isn't with them, so to speak, as long as they keep crashing off on their own.

There's also a secondary storyline, or maybe an interconnecting storyline, about a star gate found beneath the St. Louis arch. Oddly, not much happens with that storyline. However, the book is apparently the first in a series and I'm guessing one can expect more about the star gate and an archeologist who was only briefly in the storyline in future books.

The biggest problem I had with the book was that it was repetitive. The same creatures keep appearing, snarling threats or (in the case of the good angels) instructing the Watchers -- telling them when to run, when to fight or hide, etc. It would have been easy to set aside the book near the beginning, simply because the individual Watchers were experiencing the same nightmares, remembering bits from the past, etc., but you have to read all five points of view. And, I did find it disappointing that the Watchers were a little too dim to figure out that prayer was protective -- if they asked God for help, they got it immediately.

In general, I really liked the book but became a little weary of the repetition at the beginning and end of the book.

3.5/5 - An enjoyable read, creepy and suspenseful but predictable. I'm giving it a slightly above-average rating because I did find it compelling enough to read the entire book, although I was ready for it to end by about page 280. A little tightening and less repetition would have made it a better read.

It only took the electrician 2 1/2 hours to replace our breaker box. Wahoo! No flickering lights! He said, "That other breaker box was shot." Haha. Doof. I tried to tell him that on Monday, but did he listen? Anyway, we're hoping our electrical ills are over. So far, so good. It's nice to have a shiny new breaker box.

That's all the news. Rather dull around here, isn't it? I suppose I'll go do something exciting, like pay bills, now. Happy Friday!
Posted by Bookfool at 11:00 AM