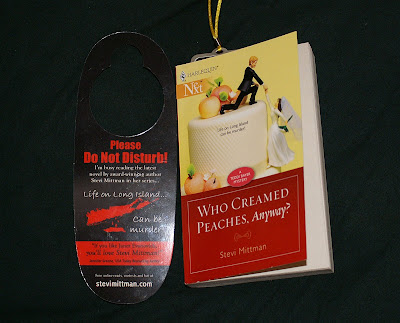 I stuck that nifty door-hanger thing on the doorknob. It didn't work. When a guy wants to talk, he's going to talk.

What led you to pick up this book? The author has become an email friend but I was meant to interview her for Estella's Revenge and then my life went down the proverbial drain and I didn't contact her for months. When I saw her book on the racks, I wrote to apologize and she sent me a copy. Thank you, Stevi! And, honestly, don't you love authors?

Summarize the plot but don't give away the ending. Who Creamed Peaches, Anyway? continues the series starring mother, decorator and sleuth Teddi Bayer and her boyfriend detective, Drew Swoones. When Drew's partner is arrested for the murder of Peaches Lipschitz (also known as the "Hooker Housewife") and Drew is barred from investigating, Teddi decides to do her own sleuthing. But, she has to pretend she has broken up with Drew in order to ensure that it doesn't appear that he's involved in the investigation. And, sometimes it's just a little difficult to determine whether he's doing a fantastic job of pretending or he really has lost interest.

What did you like most about the book? Again, the characters.

What did you think of the characters? I love Teddi's tenacity and the honest portrayal of the frustrations of being a mother, daughter, and a woman in general. I love the cop hero, Drew. He's almost too good to be true, but then so are Ranger and Joe in the Stephanie Plum series, right? So, I say, "Well done." Love a good, sensitive alpha male. And, I love Teddi's annoying mother.

Share a favorite scene from the book: I thought the ending was perfect, but I can't give it away.

In general: I'm very fond of the relationship dynamics between Drew and Teddi and that is what really brings me back to the Teddi Bayer books as I'm not a big fan of mysteries, cozy or otherwise. The secondary storyline with Teddi's son, Jesse, made me cringe. But, I thought the mystery was good. This is a lighthearted series and I will miss it immensely. Harlequin is ditching the NEXT line. I'm really irritated with Harlequin. I love Stevi's light, humorous style.

Don't feel like rating, tonight. Numbers are irritating me, like an itch that won't go away. Weird. In general, I enjoyed the mystery and felt very uncomfortable with the secondary storyline but the characters still win out and I was very happy with the conclusion. This one has a little graphic sex and a lot of innuendo.

Just finished: The World According to Mimi Smartypants

Can't write after this because the formatting goes blooey, so the following will be the last item in this post, with apologies to those who like a tidy post-ending . . .