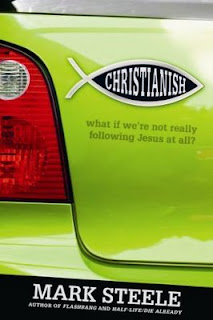 I don't know when this competitive urge for Christians to get the win started, but it's made an awful mess of things. It may have been when we stopped pursuing Jesus and instead began picking sides. After all, the Beatitudes don't tend to look a lot like modern Christianity. We choose a political team. We select a denominational preference. We hitch our cart to a branch of philosophy. Anyone that disagrees is quickly and succinctly judged, and simultaneously disregarded as worthless.

Big problem with that approach.

We are supposed to be loving those who don't agree with us to Jesus--and you can't love those whom you deem worthless.

Christianish is subtitled, "What if we're not really following Jesus at all?" Wow, how's that for a thought? Before I go any further, I should mention that this book is specifically directed at people who are church-going Christians and the author was raised in a Christian school, so he has a slightly different perspective from some of us -- those who are Christian but don't currently attend church and/or those who grew up in secular (aka, regular) schools. I thought my childhood was strict, but wow . . . it must really be something to grow up in a school where even Halloween costumes tend to have Biblical themes. In that way, the author has a slightly skewed perspective, but his points are valid.

Steele zones in on the hypocrisy of Christians, how American Christians have reinterpreted the scriptures to suit our needs (that's what the quote above is about -- how we've decided somewhere in the Bible it says we're going to be granted prosperity and those who aren't prosperous must be doing something wrong) and how far removed most of us are from doing what the Bible actually says we're supposed to do.

He talks about how the church has tried to change with the times and instead has ended up alienating some of its own. And, he talks about behavior -- how the outside needs to reflect the inside . . . which, I suppose, is where that cover image comes from. I, for one, could not possibly count the number of times a car with the ubiquitous fish symbol has cut me off in traffic (the reason, in fact, that I've chosen not to put one on my own car -- because, what does it say to people if you make a bad move in traffic, whether you mean to or not?).

What I particularly love about this book is the anecdotes from Steele's life. They're mostly hilarious, sometimes poignant. He occasionally lost me when he dived into his theology, but the point was usually evident before he leapt in and muddled it up by explaining the deeper meaning. There's a story about a man named Michael, who overcame a severe phobia and then went on to help others do the things that could have easily paralyzed him, toward the end of the book. That one, for some reason, really got to me. I had tears streaming down my face; and, honestly -- I have no idea why. Perhaps I felt like he was speaking to me and the fears I have allowed myself not to face. Regardless, I just loved that story.

4/5 - Very good; excellent anecdotes but sometimes the application was a little convoluted and hard to understand. In general, this book was not quite what I expected but I loved what the author had to say and think his challenge to how we view ourselves as Christians is worth discussing. I'm going to haul this one to Bible study and pass it around.

I can't do a green post without tossing in a lizard. Apple green is one of my favorite colors, you know. This fellow was hanging out in a tree next to the city pool, where I've been spending a lot of time, lately. High school swim season chops my days into itty bitty chunks, but I love it. Isn't this little anole a cutie? We'll call him our Wahoo Lizard, since it's Wednesday. On another note: I haven't bothered to stick a Book Blogger Appreciation Week button in my sidebar and I haven't written a post about it, but that's not a deliberate oversight so much as . . . I couldn't think of anything to say and keep forgetting to update my sidebar. I signed up thinking it would be a great way to view some other book blogs that I might not have found, otherwise. And, I was surprised to find that I've actually been nominated for awards in two categories. Many thanks to whoever did the nominating!!! I'm assuming those nominations came from a regular visitor (or two).

It's Wednesday! What do you have to wahoo about? I'm enjoying swim season -- the perfect excuse to finally get my camera out of the bag. Wahoo! for swim season. And, Happy Wednesday!