Hugh and Bess by Susan Higginbotham 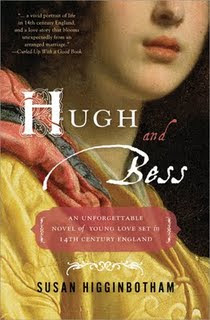 Subtitled "An Unforgettable Novel of Young Love Set in 14th Century England," Hugh and Bess begins with the impending marriage of young Bess de Montacute to 32-year-old Hugh le Despenser, a man whose father and grandfather were both executed as traitors.

Bess could not be less pleased. Already a widow at 13 1/2, she has inherited substantial properties and would just as soon remain unmarried. That her parents are marrying her off to a man whose family is infamous is bad enough -- but he's old.

Once married, Bess is surprised to find that Hugh is affectionate and patient. As a knight, he must occasionally leave to battle the Scots and, later, France. But, Bess has been taught how to handle a large estate on her own and each absence gives her a little more time to adjust to actually living as a married woman. Eventually, Hugh wins Bess over and a genuine love begins to grow; and, that is when they begin to face their biggest challenges, including the knowledge of Hugh's past love, the fighting in France and then the Black Plague. Will they survive the unrelenting spread of the Black Death or will Hugh and Bess be taken, as well?

What a fun read. I am rather History Stupid, so if there are any errors or changes in the historical facts (other than those listed by the author), I wouldn't recognize them. The 14th century was such a dark, dirty, violent time -- that much I know. Bess and Hugh are wealthy, so they're attended by servants and one only glimpses the violence through descriptions of executions and deaths during war. For the most part, Hugh and Bess is really the story of how one couple, separated by a generation in age and each carrying burdens of ancestry and family horrors, manage to slowly discover love.

Bess is a little bit simpering, at first, but I think we all were at 13. At least, I certainly was. I loved the way her character gradually grew into a woman of strength, courage and passion. Hugh is likeable from the outset, a man whose sense of humor eventually endears him to most everyone. He's also tender but strong, courageous in battle but emotional in times of loss. I just loved the characters.

4.5/5 - Breezy historical fiction with great characters and plotting. There is quite a huge cast, but the book is so readable that I had little trouble distinguishing one from another (even though there were many Edwards and Joans).