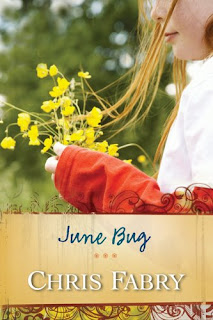 Some people know every little thing about themselves, like how much they weighed when they were born and how long they were from head to toe and which hospital their mama gave birth to them in and stuff like that.

. . . My dad says there's a lot of things people don't need and that their houses get cluttered with it and they store it in basements that flood and get ruined, so it's better to live simple and do what you want rather than get tied down to a mortgage - whatever that is. I guess that's why we live in an RV. Some people say "live out of," but I don't see how you can live out of something when you're living inside it and that's what we do. Daddy sleeps on the bed by the big window in the back, and I sleep in the one over the driver's seat. You have to remember not to sit up real quick in the morning or you'll have a headache all day, but it's nice having your own room.

I believed everything my daddy told me until I walked into Walmart and saw my picture on a poster over by the place where the guy with the blue vest stands. He had clear tubes going into his nose, and a hiss of air came out every time he said, "Welcome to Walmart."

June Bug is a 9-year-old girl who has lived on the road with her father for 7 years. She doesn't know a thing about her mother, has been educated entirely by her dad and is just a little bit tired of living a nomadic life; but, she has a terrific father and knows she has it good in many ways. While she and her father are stuck in Colorado, waiting for an RV part, she sees a poster of a missing girl named Natalie Anne Edwards in Walmart and is stunned. The computerized image of what Natalie should look like is practically a mirror image of herself. June Bug starts to question her father at nearly the same time a car is pulled out of a lake in Dogwood, West Virginia and a missing girl by the name of Natalie Anne Edwards becomes national news, again, 7 years after her disappearance. And, that's all I'm going to tell you because there's a lot that happens in this book but I don't want to ruin it.

June Bug is a tale that is heartbreakingly beautiful, emotionally charged and gripping -- utterly, completely gripping because the author skillfully and slowly peels the layers away, revealing the story of how and why one little girl disappeared, her father's history, and all about her family. The story is general fiction, but the mystery element is so tantalizing that it was impossible to put down. I read the book in one day (very unusual - I'm not a fast reader).

Now, the kicker. June Bug's publisher is Tyndale House, a Christian publishing company. Yes, it has Christian elements, but again . . . simply a superlative book, not preachy. It is really mind-blowing to me that just 7 or 8 years ago I was unwilling to touch a Christian book because I thought they were, in general, plodding and inferior. Most of the best books I've read this year have been Christian titles.

I can't tell you how that has shocked me. They are well-written, beautifully plotted, unique stories. And, the "preachy thing" is almost entirely absent from Christian writing, which is how it needs to be. My objective in reading Christian or inspirational books is to read books that have good storylines without the elements I dislike. Graphic sex, swearing and violence don't necessarily improve a book in any way, in my opinion; they just make some of us cringe. It's also especially exciting to find that there are now so many books that I'm comfortable handing to my teenager.

The only flaw I found in June Bug is that the beginning sounds more like it was written by a 9-year-old than the remainder of the book. The paragraphs above are the opening three paragraphs (minus a couple of sentences, due to space considerations). After the opening chapter, June Bug seems to become a great deal sharper and less childish in a short time, but never to the point that she's impossible to believe in. Also, the ending . . . agony. I love/hate the ending. I synopsized the book for my husband and told him why I wanted the book to end a certain way and how it ended. We agreed that it had to end the way it did -- it simply wouldn't have worked for it to have ended the way my heart desired.

My way of dealing with an ending I don't love is to either mentally change it or tack on an extra imaginary ending in my head. I can't tell you my imagined ending because then you'd know the real one. Just go out and buy it. If you hate it, you can ignore me the next time I say "Buy this book," because I almost never do. I don't want 200 people to blame me for a bad reading experience. June Bug is an excellent read -- no two ways about it. Because of the slight inconsistency in tone, I'm taking off a half-point. I can't bear to take off any more than that.

4.5/5 - Excellent writing, emotionally engaging, well-developed characters, solid plotting. I found this book impossible to put down. I actually figured out the mystery about 50 pages before the end but it didn't matter one whit. How the author ended the book was just as important as the actual resolution to the mystery element. The characters are so amazing that you just have to know what's going to happen to them.

I'm writing this on Monday and I've been hammering out reviews like crazy, today. My rear end is totally numb. So, not a lot of chatter, but maybe I'll babble at you in the next post. My camera and I have not been out much at all, this summer, and I think I need to go on a field trip or two in order to get some pictures worth sharing. I noticed the lantana at my son's school is drawing a few hummingbirds and the occasional butterfly. I'm not sure I can sneak onto the school grounds without having a reason (security, barricades, etc. -- very annoying), so maybe I'll just show up early for after-school pick-up and see if I can catch something flying or fluttering around the shrubs. It seems like the weather has negatively impacted the butterfly and hummingbird life, around town. I'm not even seeing them at the pool -- where it's not unusual to see 4 or 5 different varieties of butterfly on the same plant.

Well, looky there. Somebody got carried away and chattered, after all. Better shut up and read. Happy Monday!
Posted by Bookfool at 6:05 AM