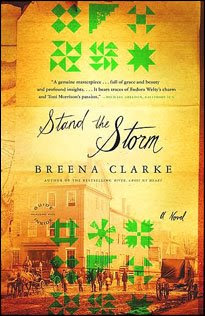 Doggone it. I really wanted to fall in love with this book because I loved the sound of it - Annie and her son Gabriel have managed to buy their freedom from slavery. Gabriel was basically rented out to a tailor and Annie was the property of a greedy plantation owner. The book is about their struggles as free blacks.

Maybe, again, it was bad timing. When I opened Stand the Storm, it grabbed me immediately. I think, though, it was the shift from prologue to first chapter that did me in. I was rolling right along, enjoying the characters and the time and place. Then, I got to Chapter 1 and I just flat got lost. There was a Sewing Annie and a Knitting Annie -- and also, apparently a time shift. But, honestly, I just got lost. Maybe if there had been dates at the top of the prologue and chapter intros, I'd have known what exactly happened. I'm assuming the book went backward in time.

After struggling to page 20, I realized I was also becoming tired of the lack of dialogue and flipped ahead to see if that ever picked up. Nope. The book is mostly expository with little dialogue. I gave up and closed it, at that point. I just wasn't in the mood to read description without action. Plus . . . I was still lost. If you've read this book, feel free to straighten me out on what happened between the prologue and first chapter. Did it go back in time to when Sewing Annie was younger? That's how it appeared to me.

I think both my husband and I have decided, "Hey, it's cool not being indebted, but the house we own kind of sucks." So, I'll be off gallivanting around, looking at houses. We drove around a little bit, today. The far end of our own neighborhood has several newer, more spacious homes. It sounds kind of funny to think about moving from one side of the neighborhood to another, but I like my neighborhood in relation to town. We get power back faster than anyone else after hurricanes and other storms, so I don't want to end up out in the boonies where people end up fighting over generator gas.

Because I am weird and maybe a little bit bored:

Today, I started up a twitter account for my cat. And, as it turns out, there are quite a few cats twittering. So, she's already got 10 followers. Popular gal. I actually got called away from pretending I was my cat by the real cat, who let out one of her mournful howls. Since our other cat died, she has to periodically wail at me. If I just holler back, "I'm here!" she's fine. I think it's a loneliness issue and she really needs a fur buddy. We'll see.

Anyway, must dash. Husband is all excited about looking at houses. Kid's working (2 hours at a time, now, but it's better than nothing) and survived his first day of school. Cat's asleep. Hope everyone's having a good day!
Posted by Bookfool at 4:44 PM