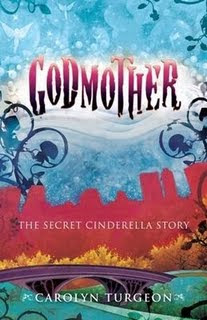 Godmother: The Secret Cinderella Story by Carolyn Turgeon
Copyright 2009
Three Rivers Press - Fiction/General
288 pages
Godmother begins in a charming little antiquarian bookstore in Manhattan. Elderly Lillian works in the store and barely makes enough money to survive but she loves her job. Early in the morning, she opens the glass case behind the counter and reads from a book that is very special because of the scrawled reminder in French, translated, "All my old loves will be returned to me." Lillian hopes this sentiment will come true for her because she used to be a fairy godmother -- and a very special one. She was Cinderella's fairy godmother, but she made a huge mistake and was cast down to Earth. At least . . . that's what we are led to believe.
The author basically draws you into this magical, fanciful tale about a woman who must bind her wings every day before going out into the world and who has been separated from her perfect, beautiful life as a fairy. The scenes alternate between her days as a fairy godmother (with her sister and two other best-fairy friends) and her current life. Lillian has discovered what she believes will finally be the way to return to the fairies -- by acting as a fairy godmother to a young lady she has met, bringing her together with the handsome and wealthy divorcee who owns the bookstore where Lillian works. Perfect! She can atone for her mistake with Cinderella and encourage a happily-ever-after ending for two people who appear to be made for each other.
Or, so the story goes until nearly the end of the tale. And, this is where little Bookfool's brain began to throb in a most discomforting manner because basically the author took everything she'd led the reader to believe and turned it upside down and inside-out. All I can say without spoiling the book completely is that there is a surprise twist. And, I suppose only the individual can decide whether or not that twist is palatable. In my opinion, it ruined the book. I enjoyed the first 250 pages. It was a nice blend of reality and fantasy. The ending, however, completely destroyed the book for this reader.
The usual Bookfool Method of Amending Bad Endings is to reimagine them in my own mind. Of course, I can't hang onto the book, in that case, because I'll be reminded of the real ending and that might make me grit my teeth, so this one will not stay in my home. I thought Marie at Boston Bibliophile wrote an excellent review:
Boston Bibliophile's review of Godmother
Marie a and I felt about the same. I like her rating, "BORROW". Yep, I'd have to agree. Godmother is not a book I will ever reread. I loved it until the ending; it was on the verge of becoming one of my favorite books of the month. And, then . . . well. Damn. It was just disappointing.
3/5 - The vast majority of this book was wonderful. While the writing is a little cliché, I thought it actually improved as the story progressed. And, then that ending. Sigh. I knocked off two points because of the ending, when a magical, lovely tale went splat and became an average book that I was tempted to throw at the wall. I have to give the author her due; if not for the ending, I would have loved this book.
The most fitting quote just popped up at Twitter: If you are going to make a book end badly, it must end badly from the beginning. ROBERT LOUIS STEVENSON
Thanks for that, Bob. And, thank you to AdviceToWriters for tweeting that quote.
In other news . . . there's not much other news. We called off the flooring people till Thursday because Bookfool was suffering. Suffering, I tell you. In a word: migraine. You would think medical science would have figured out how to prevent those suckers, by now, wouldn't you??
Just walked in: Evenings at the Argentine Club by Julia Amante
Just about to walk out: 11 books and an audio that have all been requested from Paperback Swappers. I love it when I get a whole bunch of requests at once. The people in line behind me at the Post Office usually are not as thrilled as I am.
Tomorrow: I'll be going to a swim meet! Squee! And, the weather is decent!!! Kind of weird for August, but we're loving it. I was going to post a picture of my son swimming, but he said I don't have permission. I'll sneak one in when he's not looking, later in the week. Don't tell. ;)

Bookfool, recently taunted by a hummingbird who apparently did not realize he was supposed to hover nicely and pose, rather than chase a butterfly and then hide in the tree.