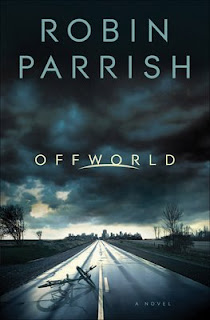 Offworld by Robin Parrish
Copyright 2009
Bethany House - Futuristic/Sci-Fi Thriller
361 pages
Author's Website
What led you to pick up this book? I read the description of Offworld in the "coming soon" section at the Bethany House website and it sounded like my kind of read -- action-packed, futuristic adventure. Jim at Bethany House kindly sent me a copy. Just FYI, I'll be foisting this one on the youngster. I know he'll love it as much as I did.
Describe the plot without giving anything away. Before the end of their mission on Mars, the Ares crew lost contact with NASA and Commander Chris Burke had a near-death experience that has led to flashbacks and dangerous blackouts. Still unable to acquire contact when they arrive home, the crew crash-lands on Earth, only to find that there's nobody on the planet. No people, no animals, no bugs. What could possibly have happened to make everyone simply disappear? The answer apparently lies in Houston, where an incredibly bright beam of light is visible via satellite imagery.
As they set off for Houston, wending their way around the wrecked vehicles left behind, foraging for food, driving abandoned vehicles and facing surprising peril, they encounter a single human -- a young woman whose life "between the cracks" has made her a survivor. 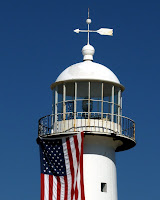 I loved absolutely every scene in the book. So much happens in this book that it's like a ride on the fast train through fire, flood and explosions with people jumping on you while trying to pick up all the puzzle pieces that scattered when the train lurched while the dudes who are jumping you threaten to kill you if you try to put your freaking puzzle together. Gosh.

I will say, however, that I think my favorite part had to be the bit where the crew and Mae are sheltering in the Biloxi lighthouse because the lighthouse (my photo, at left) survived Katrina and I liked the idea of people using it as shelter. I wouldn't have sat on the balcony and dangled my legs like they did, though. Can you see the rust? Hard to imagine 4 or 5 people sitting on that balcony without creaking and crunching noises.

Was there anything you didn't like about the book? There were a couple of technical errors that surprised me and the reasoning for the disappearance of humanity is a little far-fetched, but such things didn't ruin the book for me. In fact, I found it was nearly impossible to stop to ponder anything while reading the book because it's such a roller-coaster ride. I would not recommend starting this book at night, unless you're in the mood to pull an all-nighter.

I loved the characters. Each of them was flawed in some way and as the story progressed, the author slowly peeled away the layers and revealed their pasts -- how they became who they are, their secrets, what drove them to become successful. They were very human, not the glossy image of an astronaut that you see from watching TV, but people who have loved and lost, made mistakes and lived through intense pain. One is even a very, very lonely man in spite of his fame.

Bethany House is known as a Christian publishing company, but there is next to nothing in this story to indicate that Offworld is "Christian" apart from some hints that there's a higher power. Chris occasionally prays for help, but he does so generically. He could be just asking the universe to give him a boost. Rather than a book directed at Christians, Offworld is simply a remarkably fresh look at a futuristic world and a tense, suspenseful adventure for anyone. It is clean -- no swearing, no sex. There's plenty of violence, though I think given the storyline it's unavoidable and it's not disgusting or gory. The ending is a little predictable but not in such a way as to ruin the book.

For anyone and everyone. It's set in 2033, so while you could say it's a sci-fi and it is futuristic, it's not so far in the future that I think the usual anti-sci-fi crowd would be put off. I could be wrong about that.

- Excellent writing, unique storyline, tremendous action and suspense and a fantastic ending. I have a feeling I will not forget this book for a long time.
Other reviews:
Da Blog - love the comments in this one on the lack of preachiness
Window to My World
Faith and Geekery
A Book Lover
Should Be Reading - A differing viewpoint; MizB found the opening slow

And, now for something completely different

- Sunny weather! Whoa! I'd forgotten what it felt like to have light streaming through the windows. I like!!! We had close lightning, yesterday. My husband was out running an errand so I thought maybe I should open the door for him. The lightning was hitting so near us, though, that the cat wailed and ran away to hide and I had to cover my ears. I closed the door. Huzzybuns got really, really wet.

- School starts in our area on Tuesday, August 4. Our school district is "transitioning to year-round schooling". I think they're crazy. It gets dangerously hot in Mississippi, so starting the year early means forcing kids who march in band and play outdoor games to practice outdoors during the hottest month of the year, when the UV radiation is also extreme. My opinion, but I think that's just evil. We insisted our son leave band after the end of his sophomore year because the band kids were forced to practice outdoors in temperatures up to 115 degrees.

Note on the sidebar

- I've recently added a little blurb asking people who quote my reviews to ask permission. This doesn't mean I object to the usual bloggery stuff - quoting my thoughts along with yours (even if you disagree) in a blog review or linking up. I added that because I was perusing various places where I've been quoted, one day, and I discovered that I've been quoted several places totally out of context, making it appear as if I loved a book when I said something positive but actually wasn't too enamored of the book, in general.

This bugs me. I don't want people to zip off and buy a book on a false recommendation because someone pulled a sound bite out and misused it. However, I do go out of my way to find something positive to say about each and every book I read and that's apparently easy to abuse. I don't mind even a misquote if there's a link back to the original post to put a quote into context; I do mind the use of a very positive quote for a book I don't recommend without a link so that readers can see the entire review and get the full picture.

Was that two rants in a row?

That's very unusual for me. I think I'll go exercise. If you've seen my sidebar, you know that God told me I was fat in a dream. I mean, really. If you're dreaming and God tells you you're fat, you have to take it seriously.