The Woodstock Story Book by Linanne Sackett and Barry Levine 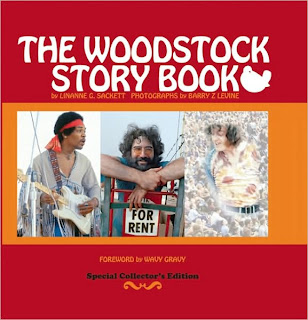 My copy of The Woodstock Story Book arrived on Saturday and I plopped right down to flip through it without realizing it would be such a quick read that I'd finish it before I got back up.

Just like the title indicates, the book is a "story book" very much in the form of a children's book, with rhyming text throughout:

The crowds assembled, started to grow

Still not sure if the acts would show

Captions round out the story of Woodstock, which is told in words and photographs with fond reminiscence and levity. As the story opens, you see photos of the crowd, tickets to the three-day event, the land where the concert was to take place. People are shown trickling in while construction crews were just getting started building the stage. Young people walked, it says, as far as 15 miles to attend the concert.

I only knew bits and pieces about Woodstock because I was alive when it occurred but young enough that it didn't mean anything at all to me, till later (although I do remember huddling around the TV to watch man walk on the moon, the same year). "Woodstock" was just a word that conjured up hippies, good music and a farm in New York. In spite of minimal text, I felt like the book gave me a good feel for the event, what it was all about, the atmosphere, and the variety and quality of acts.

There's some nudity, but in spite of the "make love not war" creed of the time, there are no graphic photos of people doing anything objectionable. Instead, the photos give you an understanding of the relaxed vibe in the crowd. My son read the book and particularly loved the caption about the man who walked around naked with his pet sheep and, "Nobody told him to get the flock out."

5/5 - I just loved this book. The layout is appealing with large photos, nicely captioned. Visually, the book is uncluttered and easy on the eyes. The poetic text is kind of silly, but it's not annoying; it's really just cute and adds to the light-hearted mood of The Woodstock Story Book, bringing the relaxed atmosphere to life. There's some nudity but it's not rude or offensive in any way. Still, some may want to keep it out of the hands of the younger kids if you're worried.
I'm still reading Christianish and decided I didn't want to hold off on reviewing other books, simply because I haven't finished a single title. Hopefully, I'll have that review posted by tomorrow. At the moment, my days are cut into little chunks because I'm currently driving my son to school and doing the school-to-pool run with three teenagers. This has also thrown a kink in my blog-hopping and I apologize for not having the time to visit other bloggers. Hopefully, we'll get adjusted, soon, and eventually the kiddo will return to driving himself to school (I just don't want him driving a distracting carload of teens).

Thanks to Lisa Roe and the publisher for the review copy of The Woodstock Story Book!