TSI: The Gabon Virus by McCusker and Larimore (review) 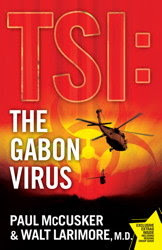 This may very well end up being Bookfool's best reading month, ever. TSI: The Gabon Virus is such a fun read that I was a worthless lump, yesterday. I started the book two weeks ago, but the tour was delayed after I'd already sat down and read the first 100 pages in a single sitting. Argh! Disappointment!! Knowing I tell myself I'll pre-post reviews and then never do, I went ahead and set the book aside, fearing that I'd forget everything if I finished the book and then waited two weeks to post. I was a little worried that I'd have to reread that first 100 pages (even though I liked them enough to find the book worth starting over).

Boy, was I wrong. When I picked the book back up the characters, setting, and plot were still firmly entrenched in my memory. This is one grabber of a story.

TSI stands for "Time Scene Investigators"--basically, a team of scientists who research historical outbreaks of certain diseases in order to stop or prevent modern plagues. In TSI: The Gabon Virus there is a ruthless pharmaceutical company, a band of radical environmentalists called Return to Earth, the science team, their cohorts in various health- and crime-investigating organizations and a military presence. The cast is huge, but the bulk of the book focuses on the science team.

In 1666, a devastating plague hit Eyam, England and the selfless decision to quarantine the town led to the death of nearly all of its citizens; yet, their sacrifice kept the disease from spreading throughout England. The mysterious Blue Monk, who comforted and aided those who were suffering from the plague but did not contract it himself, along with the descendants of the villagers who survived, may hold the key to stopping a new plague.

In Gabon, Africa, a cultish religious group has committed mass suicide after the test of a vaccine for a strain of ebola has gone horribly wrong, infecting everyone. One boy, however, chose not to drink the poison and escaped -- only to see his village blown up by the military and then to end up carrying the now-airborne disease with him, infecting everyone he encounters as he runs for his life, convinced the end of the world has begun.

The TSI team is called in to investigate and search for a solution to prevent a major pandemic. They arrive in Eyam, England with the hope of discovering some sort of genetic key to what makes some people survive by acquiring DNA samples from living descendants and original survivors. But, there are complications. Members of the radical group Return to Earth believe humans are destroying the earth and, therefore, need to die in order to restore the planet. A pandemic would suit their purposes and they're willing to kill to stop progress in the search for a cure.

Meanwhile, history plays an interesting role as it turns out bodies aren't necessarily buried beneath their tombstones and the mysterious Blue Monk's burial site is unknown. When the Blue Monk appears in ghostly form to drop hints, those who see him are a little nervous about sharing their information; and, they're not exactly certain what the ghost is trying to tell them. But, the clock is ticking. The young boy in Africa is headed toward Libreville, a city with a population close to 500,000. If he makes it to Libreville, the end of humanity is almost certain.

There are a few historical scenes from Eyams to help fill out the historical perspective. The authors also describe the historical basis for their story, distinguishing which parts are real (based on actual history or current medical science) from the entirely or partially imaginary aspects in the extra material at the end of the book.

My thoughts: Wow. What a breathless, exciting, thrilling ride. I absolutely loved this book and truly was a worthless bum, yesterday. While I wouldn't call it a perfect book because there were a few too many coincidences in the plot (none of which I can share because they're spoilers), I was willing to dismiss those moments when suspension of disbelief got a knock on the head because I was having too much fun reading to let a few little things bother me. I could not put the book down.

Preachy or not? Not really preachy, but the Christian element can't be overlooked. Mark Carlson, one of the doctors who has joined the TSI team, is a wounded soul and has not yet learned to carry on despite his losses. The answer to his pain comes to him in a way I can't share (another spoiler) but it's definitely Bible-based. There are Christian and non-Christian characters. Those who are Christian pray or reflect on Bible passages. The young boy has been reared with a group that can only be called a cult, although they base their beliefs on the Bible. So, there's plenty of mention of Christianity and there are quotes from the Bible, but there's also a realistically diverse cast.

4.5/5 - Excellent story, with a few "coincidences", but they're worth ignoring because the story is too fun to abandon. A fast-paced, deliciously thrilling, well-written, plot-driven story. Where necessary, the authors did a great job of explaining motivation and filling in necessary backstory for characterization.

This is my third book written (co-written, in this case) by Paul McCusker -- the other two were Young Adult books that my son and I enjoyed. McCusker is fast becoming one of my favorite authors. The TSI team will be returning in future novels and I can't wait to read more. But, I guess I have to. You know how that goes.

Since part of the book takes place in Africa and gorillas come from Africa, you get a gorilla pic. Lucky you. 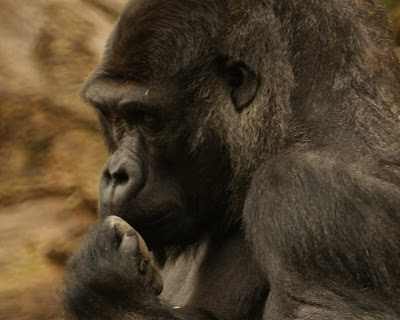 Bookfool, who really needs to accomplish something, today