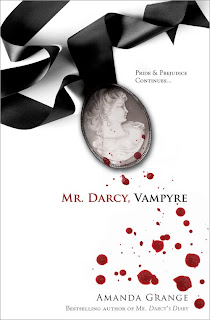 A married man in possession of a dark fortune must be in want of an eternal wife.

Thus sayeth the cover of Mr. Darcy, Vampyre - implying that Mr. Darcy is going to sweep Elizabeth Bennet away, chomp down on her neck and off they go. But, it's not entirely accurate to say that Mr. Darcy is looking for "an eternal wife". He's a vampire, but he's not proud of it and it kind of sucks* that he finds her neck so enticing. (*Deliberate pun: guilty as charged)

As the book opens, Elizabeth is preparing for her wedding. The vows go off without a hitch and the two brides and grooms attend their reception. When Lizzy and Darcy take off for their wedding tour, Darcy surprises Lizzy by informing her that they're going to Europe rather than the Lake Country. He also looks tense and brooding, but only for brief moments.

Mr. Darcy, Vampyre is told from Elizabeth's point of view and she is an intelligent, curious woman so there are some interesting bits of history discussed when they make stops in Paris, the Alps, Venice and Rome. But, the story is really about an unconsummated marriage, a man who gives his wife tender looks but fleetingly looks pained, and a wife who is getting pretty pissed off because -- as far as she's concerned -- if he won't visit her in her bedchamber, they're not really married at all.

At least, that's how I saw it. I've been discussing Mr. Darcy, Vampyre with a friend who also recently read the book and I'm not even certain what it was I expected when I requested a copy from Sourcebooks. I think, though, that I was probably expecting a humorous take, more along the lines of a parody than a typical spin-off read. Mr. Darcy, Vampyre is nowhere close to a parody; in fact, I would venture to say that the story is taken too seriously, although as Pride & Prejudice off-shoots go, it's not horrible. I think the author stayed fairly true to the characters and just played with them a bit.

The story is a slow one. Mr. Darcy doesn't even admit he's a vampire till less than 75 pages from the end of the book. There are some bursts of excitement and tension, a few moments of levity (skinny-dipping in the Alps, brrrrr, when Lady Catherine de Bourgh shows up) and a lot of angst. Not a book I would warn you away from, but not one of my favorites, either.

3/5 - Average; weak and contrived, very slow but fairly true to the characters. Decent writing, lacking the sparkling wit I always hope for in spin-offs, though. I think a lot of readers -- particularly those who enjoy a more character-driven novel, rather than intense action -- will enjoy Mr. Darcy, Vampyre and recommend reading a few more reviews if you're unsure about whether or not to buy the book. I did not like the ending at all, but one of the reviewers I've linked to, below, enjoyed the ending immensely.

Diary of an Eccentric

I've been pondering the idea of returning my avatar to the old "thinking cap" cartoon that I used in my profile for the first two years of blogging. Finally, yesterday, I decided to go for it. And, it's kind of nice . . . a little like coming home. I did like the gray kitty because I always thought it looked like she was laughing, but a couple of people thought she was scary. What do you think? Is the thinking cap silly or an improvement?

At least I found one:

I'm still battling a headache (all week - ugh!) but I managed to spot a single butterfly on our lantana. So, here's an extra little wahoo . . . 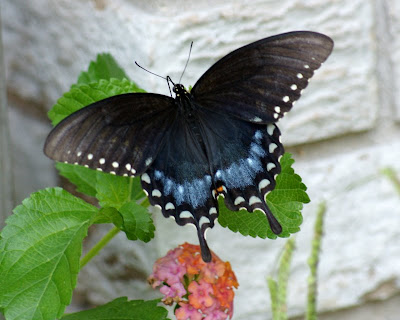 Bookfool, who wants to go back to bed but that would just be silly because she has to pick up her son in an hour (ah, the joy of school).