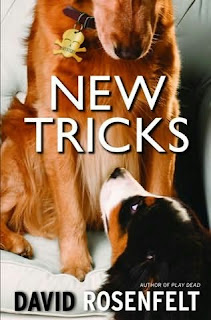 I'm going to use the cover blurb on this one because I think it's nicely written and a decent synopsis that doesn't give anything away:

Attorney Andy Carpenter is about to represesnt an adorable Bernese mountain dog puppy, whose owner was brutally murdered, in a custody fight. Few can rival Andy's affection for dogs, and he will do whatever it takes to insure that this little pup doesn't fall into the wrong hands. But his playful new friend possesses a deadly and valuable secret that a number of people are willing to resort to violence to obtain. It will take more than Andy's usual courtroom theatrics to save this dog, including a little help from his beloved golden retriever, Tara. Andy soon discovers that everyone around him is in danger, including his longtime girlfriend, Laurie, and he will have to come up with some high-risk new tricks to save those he holds most dear.

I love David Rosentfelt. I think this is the third Andy Carpenter mystery I've read (blame SuziQ, who piqued my interest and got me going when she assured me that they're not of the nightmare-inducing variety). I've missed at least two titles but this book stands alone well. Where necessary, the author quickly fills in relevant information from past novels without going overboard. As usual, Andy's trademark wit and refusal to follow the rules makes things fun. And, Rosenfelt even tossed in a nice explosion. I love it when authors blow things up.

The mystery was a lot more complex than I expected it to be and I enjoyed that. It wasn't confusing -- I'm not really the puzzle-solving kind, so too many strands tend to annoy me; but, New Tricks was just about right. And, I absolutely love the author's affectionate portrayal of dogs.

Thanks to Miriam at Hatchette for the review copy!

Bit of utter coolness: I'm only temporarily driving three teenagers to the pool, since one of them has been grounded and she'll be back to driving herself, next week, but at the moment I am driving a car full of teenagers who are all avid readers. The conversations on the way to the pool have been lively and fun. They tend to lean toward fantasy and paranormal fiction (Eragon, Twilight and the Harry Potter books are favorites) and all three admit to reading favorite books to tattered shreds. It would actually be nice if the drive to the pool was a wee bit longer, just for the sake of listening to the kids talk.

Pondering, this week: Have you ever wondered why the British have the cutest slang words with the worst meanings? I mean . . . bugger sounds so adorable till you know what it means. There is a part of me that wants to be able to say, "Bugger off!" simply because I like the sound of the word, but darned if it isn't about the nastiest cute-sounding curse word. And, of course, there are lots more cute, awful British words. However, I don't think I'll mention any more because who knows what kind of delightful hits the word "bugger" will inspire.

How I Live Now by Meg Rosoff
Letters from Rapunzel by Sara Lewis Holmes, and
Skeleton Key by Anthony Horowitz (all from Paperback Swap)

Gotta go. My cat needs the computer. She has some important twittering to do. Seriously.
Posted by Bookfool at 11:23 AM