The Missionary by William Carmichael and David Lambert 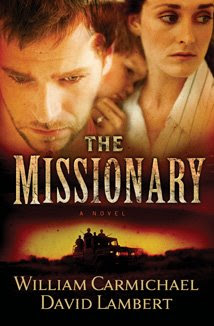 The Missionary is the story of a young man who runs a home and clinic for homeless children in Venezuela with his wife and an older couple. David Eller, his wife Christie and their young son Davy live at Hope Village; Christie is a nurse who works in the clinic. When the story begins, David is rushing to try to save a street child who has pneumonia. A stranger with an ulterior motive offers help but David declines.

***WARNING: There may be some spoilers in the following 2 paragraphs***

The next day, the stranger shows up at Hope Village with a donation. His name is Carlos and he says he has some friends who can be an even greater help. Christie has a bad feeling about Carlos but David ignores her and goes to meet Carlos and his friends. Carlos has a proposition. David has made some bold televised statements about the Venezualan president; he believes President Guzman is only making conditions worse for the homeless. Carlos says David can do a few small errands that will help lead to a peaceful coups; in return Hope Village will receive a substantial donation.

Although David is a little unsure about what he's been asked to do, he reasons that the money is worth the risks and doesn't bother to tell his wife his intentions. Unfortunately, things don't go as planned and suddenly an innocent missionary is in over his head. Will he be able to save his family and escape from a dangerous dictator?

There's more to the plot but I don't want to spoil it, so I'll just stop right there and say that David ends up in a heap of trouble and a good portion of the book is run-chase-hide as David tries to get his family out of the country.

3/5 - I'd call this book average. I liked it, but I thought the identities of various people who were involved in the coups, the Venezualan government officials at various levels and the drug cartel were confusing. Carlos, in particular, appears to be a good guy with a secret then a bad guy then maybe a good guy. To be honest, I never quite figured out quite a few of the characters and their motivations. Also, David is like the proverbial stupid heroine (except for the fact that he's a guy). He just keeps making one ridiculous decision after another till you want to hit him upside the head.

In fact, I think probably the main problem with The Missionary is that David is so clueless that he keeps getting himself into more and more trouble. There's never a point that you feel like he's the hero, resourceful and strong, a man who can save himself and his family. I wanted him to wise up, feel his courage bolstered after he prayed and make intelligent decisions. I kept hoping he'd be proactive rather than reactive.

There were things I enjoyed about this book. There's plenty of action. In general, I tend to like books in which people are on the run from something or someone very bad. I love a fast-paced novel. There is a Christian aspect to the book, but it's incredibly watered down and there's a good bit of violence. Read this if you like a fairly suspenseful book about someone on the run and don't mind violence.
Posted by Bookfool at 2:33 PM