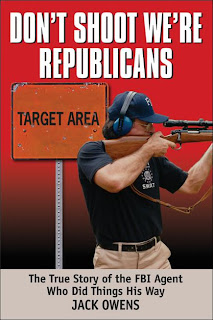 One night, because we had nothing more pressing and we were itching for adventure, three carloads of agents drove out of Birmingham and up the west side of Alabama into northeast Mississippi, hunting two fugitives who were joined at the hip. One, a dude named Singleton, was wanted for killing a convenience store manager in Alabama during a robbery, shooting him for the fun of it. Singleton collected coins and was a regular at numismatic shows, where he stole coins he couldn't buy. The other fugitive I'll call Thompson, a run-of-the-mill car thief. It was June, 1978. I'd been an agent for nine years and was certain I knew everything there was to know about everything.

It was darker than the inside of a snake's butt in rural Mississippi. We were a long way from home in a caravan of dull cars, feeling our way over unfamiliar roads, talking loud, comparing notes on the office stenos, invincible and full of ourselves. Every time we got out of the cars or rolled down the windows, elephant mosquitoes came at us like lava. No one wanted to stir. I longed for peanut butter and beer, resigned to a long night of it. . . .

. . . I looked down the highway. Headlights appeared in the distance. I clicked off the safety on the [M-79 grenade launcher]. I had to pee. Luther picked up the radio mic. "Quarter mile away," he said into the radio, which might have been heard in Natchez or in Detroit and not by the agents in the two cars directly behind us. You never knew about the reach of Bureau radios.

The publisher sent a description of this book to me and I said, "Yes!" I love memoirs and this one was supposed to be light-hearted and humorous, which is the kind of tone I prefer in a memoir. The bits above were pulled from a story in the prologue. By the middle of that anecdote, I was completely hooked. It probably didn't hurt that the opening story began in familiar territory, but the author definitely has a terrific sense of humor and his easy-going style is a real grabber -- I'm sure I would have been on the edge of my seat, even if that first anecdote didn't happen to take place in Mississippi.

Jack Owens was finishing up his law degree when he decided he didn't want to practice law (or take the bar exam) and applied for a job as an FBI agent. Subtitled, "Memoirs of the FBI Agent Who Did Things His Way", Don't Shoot! We're Republicans! tells about Owens' years as an agent, beginning at the time of his application to the bureau and ending with his retirement (including a few thoughts about changes in the bureau after he left). He did occasionally buck the rules a bit, but my overwhelming impression was that Jack Owens was definitely one of the Good Guys and a man who was committed to getting the job done.

During the time Owens worked in the FBI, the first Special Weapons and Tactics team was created. He was among the first federal agents to join a S.W.A.T. team and remained on one for many years. Owens also worked as a spy during the Cold War for a time, was on one of many S.W.A.T. teams that stormed a prison where hostages were held, and among those who staked out a bridge in order to catch a serial child killer in Atlanta. The man has a lot of interesting stories to tell.

Because his style is open and honest, I liked Jack Owens immediately and knew I was going to enjoy his memoir. He's what I'd call a straight-shooter, not one to mince words. If someone was ineffective or troublesome in his position at the FBI, during the years Owens worked, he tells you what the problem was and why he had difficulty working with or for that person. And, he's not afraid to admit his own mistakes in the book. The undercurrent, however, reveals a dedicated and enthusiastic agent who seemed to make friends with the vast majority of the people he worked with. Unlike the author of a similar memoir that I read in 2007: Blowing My Cover, the author stated the discomforts of his job as facts that he and his fellow agents lived with and expected to come with the territory, rather than complaints. He respected people who did the job and did it well. I loved his attitude.

Don't Shoot! We're Republicans! is also the title of one of the chapters and it's a great story. I should add that it's one of many tales that I enjoyed so much I had to repeat it to the family.

5/5 - An excellent memoir. The author is opinionated and was a bit of a rebel in many ways, but he tells his story in a way with such a nice, light touch that he comes off as a really likable guy. This is extremely fun reading; I heartily recommend it to anyone and everyone, particularly those who enjoy memoirs.

Did you know there are two acceptable spellings for the word "likable"? "Likeable" (with an "e")is also an accepted spelling. I only know this because I write the word one way and then I rewrote it and then I finally decided I'm getting old and it's okay to check my spelling online. I have a birthday coming up, next week. My son informed me that I'm going to be a year younger than I thought. Yes! It's like getting an extra year, free of charge!!

I've finished three books, since my husband came home to work on cleaning, clutter-removal and maintenance, so having the spouse around apparently doesn't inhibit my reading style. This has been a terrific reading month. More on that another time. I've yet to do a July Reads in Review post. I'd swear I'm going to get to it, but that just tends to get me into trouble so I won't. No swearing.

Hope everyone's had a marvelous week. I'm being summoned to get back to work. My husband is a slave driver. I can't swear to that, either. That would be kind of a lie . . . so I'll just shut up, now. Happy Weekend!