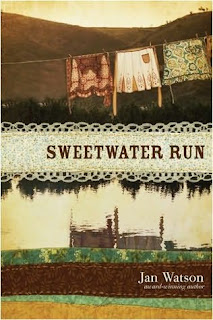 Sweetwater Run by Jan Watson
Copyright 2009
Tyndale - Fiction/Historical
292 pages
Jan Watson's Website
"He'll have his hands full with those two." Cara pictured four-year-old Wilton, a little ball of fire, and two-and-a-half-year-old Merky, the prettiest baby girl she'd ever seen.
"He needs to have his hands full," Dance said, stepping out onto the porch with a wooden spoon dripping brown bean soup. "You know what that man had the nerve to say to me this very morning?"
"I couldn't venture a guess," Cara answered.
"I was nursing this'n--" she pointed the spoon at Pauline--"and chasing that'n--" the spoon leveled at Cleve-- "when Ace says to me, 'Dance, ye need to turn off your baby maker."
Cara laughed so hard her feet lost purchase on little Cleve and he rolled over on his belly.
"It ain't one bit funny," Dance said. "Ye wouldn't be laughing if it was you."
Cara choked to a stop. "I'm sorry. What did you tell him?"
"Didn't tell him nothing--just bounced the skillet off his thick head."
"Dance!"
"Oh, it was just the little two-egg skillet." Dance held the spoon down for Cleve to mouth. "Didn't hurt him none."
Okay, so tell me. Are you smiling? This author honestly had me in stitches. Sweetwater Run is the fourth book in a series, but it stands alone so well that when a friend told me I was reading a series book, I was actually a little stunned. It took no time at all to get into the book and get to know the characters.
Sweetwater Run tells the story of Cara Whitt. Her husband's mule, Pancake, was stolen and Dimmert loved the mule so he stole his mule back. As the story opens, Dimm, the sheriff, and the man who stole Dimm's mule and the thief's father are all discussing the mule in front of the Whitts' home. When Dimm refuses to capitulate and is arrested for stealing his own mule, Cara has to learn to live by herself and face her fears. The first thing that made me love this author was the realization that she'd named a character who stole his own mule Dimm Whitt. How fun is that? Then, of course, I fell in love with all of the characters.
There's a lot more to Sweetwater Run than just Cara's challenges. The Whitt family includes her sister-in-law Dance, Dance's husband Ace and their large brood of little ones, another sister-in-law named Darcy and the elderly grandmother Fairy Mae. While Cara's learning to live on her own, she often goes to help Dance on laundry day. Dance is a bit of a mental case. Darcy is falling in love with the town lawyer, who has an ulterior motive for wanting to marry Darcy. And, Fairy Mae is quickly going downhill, leaving Darcy the choice of running off with her beau and leaving her beloved grandmother in someone else's care or staying and possibly missing out on marriage to a man who makes her heart race. And, then a second tragedy strikes.
So much happens in Sweetwater Run and the characters are all so engaging, funny and easy to love that I would have been happy if the book had been 1000 pages long. That's saying something. I'm not a big fan of chunksters.
5/5 - One of the best books I've read in 2009. Exceptional characterization, perfect dialogue, lots of action, love, disaster, and plenty of deeper meaning in all the events that occur. I just loved this book. I've added the first three books in the series to my wish list and I'm happy to say that Sweetwater Run is G-rated, very family-friendly. Don't know if the kids would like it, but you can leave it lying out without worry.
Side notes: This is another book put out by a Christian publisher and the characters are mostly Christian, but like many of the newer Christian titles there's never a sense that Christianity is being hammered into your head. It's just a part of the characterization. Some of the characters go to church, some don't. In times of trouble, the Bible gives Cara strength, but that isn't the case, at first. There's one surprising character who helps Cara conquer her fears and gather courage by reading the Bible.
It's Wednesday, what have you got to wahoo about? I'm wahooing about the lack of rain. I love rain, but not two weeks of heavy storms in a row. A little now and then is enough to restore my sagging spirits. So, wahoo for sunshine! And, because I'm thinking of water, here's a picture taken of water in a small waterfall at the Memphis Zoo. I have kind of a thing for trying to photograph water droplets. 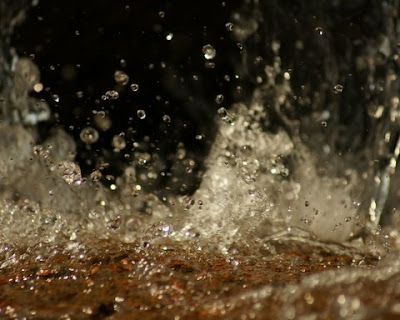 Many wahoos to you!
Posted by Bookfool at 10:00 PM