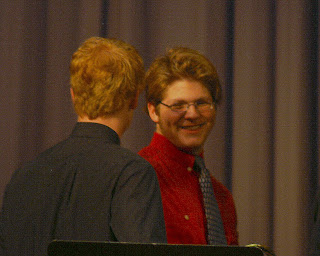 We're heading into the final weeks of the kiddo's school year and they're loading us down with activities - concert, fund raisers, banquets . . . you name it. Posts will probably continue to be short and possibly become a bit sporadic, although I will try not to skimp on the reviews. Writing a review is like purging, for me, a chance to spill thoughts. Anyone else feel that way?

That's my youngest son smiling in the red shirt, above . The band concert was terrific and I was immensely grateful, once again, for his willingness to tidy up the hair for a school event.

I'm almost finished with Rises the Night and, honestly, had trouble putting it down to zip over to the pool and drop off son for Lifesaving class. Way to go, Colleen! It's every bit as gripping as the first book. Review forthcoming, probably tomorrow.

This week's things that make me want to say "Wahoo!":

1. Emergency back-up internet options - Last night, as youngest son was preparing for his band concert, I realized that I had completely forgotten how to tie a Windsor knot. My father taught me how to tie a tie in a simple Windsor knot when I was a young tyke but we've somehow managed not to teach the youngster (who is what I would refer to as a Very Casual Fellow). I did a quick search and found this:

Wahoo for that! We had to practice a bit, but eventually got the tie to look decent and then - just to be sure - my delightful son ran across the street and asked his friend's dad if we'd done a decent job. Kiddo's friend's father gave him a thumbs-up. So, we're also grateful for . . .

2. Nice neighbors - You really do have to appreciate the kind ones, don't you?

3. Wahoo for clean, drinkable water! - I haven't got the foggiest idea how I ended up thinking about this, but I think clean water that comes right into one's house at the turn of a tap is something we often don't even think about in the United States and that we should be very, very grateful for. I've thought about it occasionally since moving to Mississippi, twenty years ago. We never experienced broken pipes and "boil water notices" back home, probably because Oklahoma is quite young, as developed areas go. During the weeks after Hurricane Katrina, when people from outside our city were driving here and literally stripping the store shelves of bottled water and food items (wow, was that ever unexpected), we were actually just fine and dandy because I've learned to keep a ready supply of bottled water for emergencies. And, in fact, I had a strong feeling that Katrina was going to be the worst hurricane we had ever seen. I made my husband cancel a business trip and call to warn some of his associates not to travel down here. So, I'm also really grateful for . . .

4. That weird thing we call the "sixth sense". - Sometimes it freaks me out a little, like the time my husband kissed me "goodbye" at 4:00 in the morning and I had an immediate mental flash of twisted metal and people walking around with flashlights (the initial image turned out to be the front page photo in our newspaper, that night). Because of that little moment of intuition, I stopped my husband and wouldn't let him leave the house for nearly 45 minutes. Had he left, he might very well have been involved in one of two horrific accidents that occurred at approximately 4:15 a.m. Both accidents took place near the on-ramp we use to access the interstate. What are the chances of two deadly accidents taking place within minutes of each other within a quarter mile? Probably very small. To have an earth-shaking mental warning like that image that flashed into my head is just such a huge gift. I don't have premonitions like that very often, but I'm very thankful for them. I think they're truly a gift from a higher power and that sometimes they're totally useless but at times a brief moment of intuition may save a life.

5. Socks. Seriously. More than half the year it's too hot down here to wear them. But, when it's cold outside my little feet turn into ice cubes. Wahoo for socks!

I've been thinking about occasionally posting a "What do you think?" question because I'm like the human equivalent of a feline, with a burning curiosity and always, always silly questions running through my mind. Here's what I was thinking about, today:

My husband and I are coming up on our 25th anniversary (I'm way too young for that, honest), which merely goes to show you that the spouse is a middle-aged guy. I think by this point in his life, he ought to be able to do simple things like remove the change from his pants pockets before putting them in the hamper, rinse and stack dishes, and remember where the paper clips are located rather than rely upon his wife to do the sorting and thinking about trivial things for him. I'm not, by any means, referring to a man with limited mental capacity - he has three university degrees. His opinion: "I'm not like you. You can't expect me to remember the little piddly details like you do." After asking me 25 times where the paper clips are kept, I seriously think he ought to be able to remember. I say it's much like the fact that I'm not good with names, but during the time I was involved in direct sales I learned how to make myself connect names with faces. I actually got pretty good at it. So, my thought is that you can make yourself do or recall something if you really desire to.

Then again, Einstein refused to remember things like phone numbers because he didn't want to waste his neurons storing useless information.

What do you think? Should a grown man of reasonable intelligence be expected to do some basic things rather than rely upon his wife to do them for him? Or is it perfectly acceptable for him to expect the wife to remember and claim incompetence?

Latest book news: Not a single book has walked into my house in at least 4 days. And, I'm planning to stop looking in the library sale corner until I've made a serious dent in the piles. I would not be willing to lay odds on my success, but I'm going to give it a try. 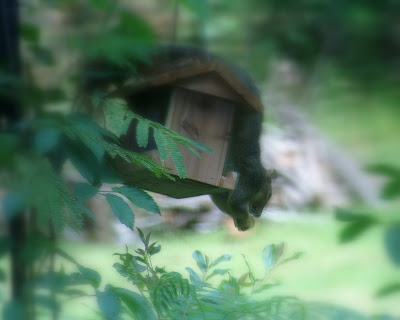 This is a terrible photo of a squirrel invading our bird feeder, to which I've added a little soft focus to try to improve the looks of the subject. Somebody needs to wash her windows. Ahem.

Hope your Wednesday was full of wahoos. There are still a little more than two remaining hours of Wednesday in my corner of the world. I think I'll spend at least one of them with a good book.
Posted by Bookfool at 9:24 PM

Email ThisBlogThis!Share to TwitterShare to FacebookShare to Pinterest
Labels: photos, Wahoo Wednesday, What do you think?